This year, our Memorial Day observance was limited due to the CoVid 19 pandemic. The following is the speech our Commander presented during the observance. 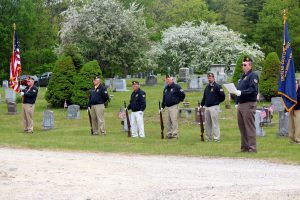 Thank you for being here today, it is my honor to be standing here in front of you. This memorial day has some unique differences, this country has been going through a crisis and every crisis has new heroes. During the 9/11 attacks, they were the first responders running into burning and crumbling buildings as others ran out. Now, during the Coronavirus pandemic, the most visible heroes are the health care professionals, who are saving others and risking their own lives while doing so.

These heroes have much in common with the people that we honor today – America’s fallen veterans. They are men and women who put their lives in harm’s way so others could carry on. They are both elite and ordinary. They are elite in the sense of character. Putting your life at risk is the ultimate definition of self-less.

They are ordinary in the fact that they represent the diverse fabric of our country. They are rich and poor, black and white, male and female. They come from every sort of background. In short, they look like any one of us.

As we celebrate the selfless and untiring performances of the healthcare workers during the COVID-19 pandemic, it brings to mind the military medics, doctors, and nurses who sacrificed their lives while treating others on the battlefield.

One such hero was Ronald Weeks, he grew up here in Marlborough and graduated in 1966. He served as a U.S. Army combat medic during the Vietnam War in 1969 & 70. Ronald received three Purple Hearts and Vietnam Service Medal with four Bronze Service Stars. He died in 2008.

Another hometown hero was Jeanne Croteau. She graduated in 1943, entered nurses training at Mass General Hospital as a Cadet Nurse — these nursing students replaced registered nurses who went into the service during WWII. She stayed a nurse for many years. Jeanne died in 2014 and is buried in Harrisville.

Approximately one million men and women of the U.S. Military have lost their lives in defense of our nation since the founding of this great Republic. 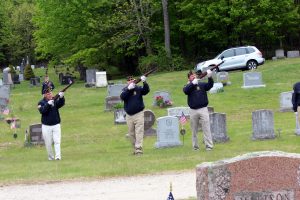 During the Spanish American War, 60 soldiers of the all-black 24​th​ Infantry Regiment volunteered to serve as nurses. Thirty-six of them would later die of yellow fever or malaria.

A generation later, the flu would kill nearly 16,000 U.S. soldiers in France during World War I. Another 30,000 American service members died in stateside camps. These men and women could have isolated safely in their
homes. But they knew they had an important job to do. A mission to accomplish. They were all on a mission to serve. 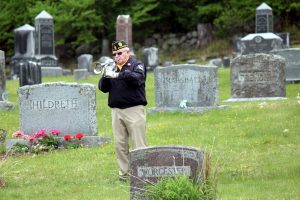 Even when the enemy is an invisible virus or a microscopic germ, the sacrifices made are just as meaningful.

This Memorial Day as we continue to honor those who fell for us in battle, let’s also pause to remember those who have also sacrificed their lives while serving others.