Posted on October 2, 2021 by Dana Whitehouse 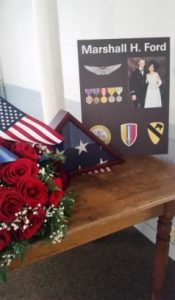 Warrant Officer Marshall Henry “Pete” Ford, twenty-two, was reported as missing in action on7 January 1968 in the Republic of Vietnam. “Pete” was attached to the 3rd Brigade, 1st Air Cavalry Division as a helicopter pilot. The helicopter he was piloting was shot down by enemy fire on 7 January while supporting the command element of the 2/12th CAV. He was officially listed as killed in action on 17 March 1968.

“Pete” was born on 10 April 1945, he was the son of Tim and Peg Ford and grew up in Marlborough, eventually graduating from the local high school. He married his high school sweetheart, Terry Huot, on 3 July 1965. Shortly thereafter, “Pete” joined the army and while assigned to Fort Walters, Texas, their daughter Angela was born on 26 June 1966. 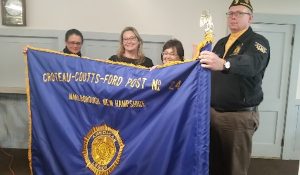 It has been well over half a century since Warrant Officer Ford died in the service of his country. Recently, he was finally recognized for his sacrifice with the renaming of the Marlborough American Legion Post. Croteau-Coutts-Ford Post 24 became official after a ceremony held 22 August. The ceremony, originally scheduled to be held outdoors at the Marlborough School, was moved indoors because of Tropical Storm Henri. The Post was honored to welcome as their special guests Gold Star family members Terry Huot Ford Belair (Marshall’s widow), Angela Ford Laroche (Marshall’s daughter) and SSgt Cathleen Kelley (Terry’s daughter and Angela’s stepsister). Cathleen was also welcomed as the newest member of the post by Commander Trent Boehmler. Also in attendance were several of Terry’s grandchildren who were there to honor a grandfather they heard numerous stories about, but never met. It was a very solemn occasion – many others in attendance were childhood friends of “Pete” who shared stories while fondly remembering him. Many said that the ceremony and the opportunity to celebrate a local hero finally brought closure to a very painful period in their lives. In a note sent to the post after the ceremony, Terry expressed best what the day meant: to Post 24 “Two small words – thank you could never express the gratitude and heartfelt caring you all put into Pete’s recognition ceremony. It was a wonderful day that all of us will remember forever… We are forever grateful! Pete will now be remembered forever.” 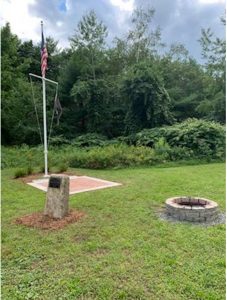 Croteau-Coutts-Ford Post 24 will be conducting this year’s Veterans Day Ceremony at a new location – the Veteran’s Memorial located at the Marlborough School. The memorial was an Eagle Scout project completed by Wyatt Switzer well over a year ago, but it has never been formally dedicated. Veteran’s Day is the perfect and most appropriate day to dedicate this wonderful memorial! The public is cordially invited to join us on November 11th for the dedication ceremony beginning at 10:30. The Veteran’s Day ceremony will follow beginning at 11 AM. Veterans Day originated as “Armistice Day” on November 11, 1919, the first anniversary of the end of World War I. Congress passed a resolution in 1926 for an annual observance, and November 11th became a national holiday beginning in 1938. Unlike Memorial Day, Veterans Day pays tribute to all American veterans—living or dead—but especially gives thanks to living veterans who served their country honorably during war or peacetime. The military men and women who serve and protect the United States come from all walks of life; they are parents, children, grandparents, friends, neighbors, and coworkers, and are an important part of our communities. With the end of America’s “longest war” in Afghanistan last month, we, as a nation and a community have even more incentive to celebrate our veterans on November 11th, 2021.