In 1988, February 3rd was established by a unanimous act of Congress as an annual “Four Chaplains Day.” In 2019, a minimum of 1,663 American Legion Posts nationwide observed Four Chaplains Day by conducting interfaith services, ceremonies, or other solemn events. Four Chaplains Day kicks off Religious Emphasis Week, a key part of the Legion’s “Service to God and Country” program.

Who Were the Four Chaplains?

The relatively new chaplains all held the rank of first lieutenant. They included a Methodist minister, Rev. George L. Fox; a Rabbi Alexander D. Goode, of the Reform movement; a Roman Catholic priest, Rev. John P. Washington; and Reformed Church in America minister, Rev. Clark V. Poling. Their backgrounds, personalities, and faiths were different, although Goode, Poling, and Washington had all served as leaders in the Boy Scouts of America. They met at the Army Chaplains School at Harvard University, where they prepared for assignments in the European theater, sailing on board USAT Dorchester to report to their new assignments.

USAT Dorchester left New York on Jan. 23, 1943, en route to Greenland, carrying the four chaplains and approximately 900 others, as part of a convoy of three ships.

The ship’s captain, Hans J. Danielsen, had been alerted that Coast Guard sonar had detected a submarine. Because German U-boats were monitoring sea lanes and had attacked and sunk ships earlier during the war, Captain Danielsen had the ship’s crew on a state of high alert even before he received that information, ordering the men to sleep in their clothing and keep their life jackets on. Many soldiers sleeping deep in the ship’s hold disregarded the order because of the engine’s heat. Others ignored it because the life jackets were uncomfortable.

During the early morning hours of Feb. 3, 1943, at 12:55 a.m., the German submarine U-223 off Newfoundland in the North Atlantic torpedoed the vessel, which knocked out the Dorchester’s electrical system, leaving the ship dark. Panic set in among the men on board, many of them trapped below decks. The chaplains sought to calm the men and organize an orderly evacuation of the ship, and helped guide wounded men to safety.

One witness, Pvt. William B. Bednar, found himself floating in oil-smeared water surrounded by dead bodies and debris. “I could hear men crying, pleading, praying,” Bednar recalls. “I could also hear the chaplains preaching courage. Their voices were the only thing that kept me going.”

Another sailor, Petty Officer John J. Mahoney, tried to reenter his cabin but Rabbi Goode stopped him. Mahoney, concerned about the cold Arctic air, explained he had forgotten his gloves. 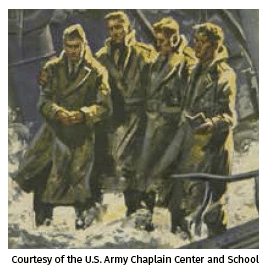 “ Never mind,” Goode responded. “I have two pairs.” The rabbi then gave the petty officer his own gloves. In retrospect, Mahoney realized that Rabbi Goode was not conveniently carrying two pairs of gloves and that the rabbi had decided not to leave the Dorchester.

As life jackets were passed out, the supply ran out before each man had one. The chaplains removed their own life jackets and gave them to others. They helped as many men as they could into lifeboats, and then linked arms and, saying prayers and singing hymns, went down with the ship.

According to some reports, survivors could hear different languages mixed in the prayers of the chaplains, including Jewish prayers in Hebrew and Catholic prayers in Latin.

Some 230 of the 904 men aboard the ship were rescued. Life jackets offered little protection from hypothermia, which killed most men in the water. The water temperature was 34 °F (1 °C) and the air temperature was 36 °F (2 °C). By the time additional rescue ships arrived, “hundreds of dead bodies were seen floating on the water, kept up by their life jackets.”

On Dec. 19, 1944, all four chaplains were posthumously awarded the Purple Heart and the Distinguished Service Cross.

Congress also attempted to confer the Medal of Honor on each of the four chaplains, but the stringent requirements for that medal required heroism performed “under fire,” and the bravery and ultimate sacrifice of these men did not technically qualify, since their actions took place after the torpedo attack. Therefore, members of Congress decided to authorize a special medal intended to have the same weight and importance as the Medal of Honor. This award, the Four Chaplains’ Medal, was approved by a unanimous act of Congress on July 14, 1960, through Public law 86-656 of the 86th Congress. The medals were presented posthumously to the next of kin of each of the four chaplains by Secretary of the Army Wilber M. Brucker at Ft. Myer, Virginia on Jan. 18, 1961.

The chaplains were honored with a commemorative stamp issued in 1948 and designed by Louis Schwimmer, the head of the Art Department of the New York branch of the U.S. Post Office Department (now called the USPS). This stamp is highly unusual because, until 2011, U.S. stamps were not normally issued in honor of someone other than a president of the United States until at least 10 years after his or her death.

Chapel of Four Chaplains
The Chapel of the Four Chaplains was dedicated on Feb. 3, 1951, by President Harry S. Truman to honor these chaplains of different faiths in the basement of Grace Baptist Church in Philadelphia. The Chapel of the Four Chaplains is currently located in Philadelphia, Pa., part of the Navy yard, after years of searching for a permanent location. In his 1951 dedication speech, the president said, “This interfaith shrine… will stand through long generations to teach Americans that as men can die heroically as brothers so should they live together in mutual faith and goodwill.”