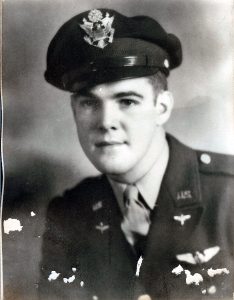 Each American Legion Post is named after an individual who lost his/her life for our country. The Marlborough Post was initially called the Clarence J Croteau Post 24 in memory of a town resident who died in France during the First World War. In 1948, the Clarence J Croteau Post 24 charter was amended and the Post was renamed Croteau-Coutts Post 24 in order to honor the memory of another young man from Marlborough who lost his life in the Pacific Theatre during the Second World War. April is the 75th anniversary of the death of Second Lieutenant Charles Beverly Coutts, United States Army Air Corps. In this month’s bulletin, the Post would like to publish a narrative of that fateful day as reported by Flight Officer (F/O) Morris Yancey, Flight Engineer, P-34:

“ Crew No. 26, Alexander Orionchek, 2nd Lt, Airplane Commander went down 28 April 1945. The mission was Kushira Airfield. Crew No. 34 was flying in the number three ship in the second sortie. Crew no. 26 was flying in number two ship in the same sortie. Shortly after dropping our bombs, a Japanese fighter rammed the right wing of Crew No. 26 ship knocking off about 20 feet of the wing.

We were flying at about 22,000 feet at the time. No. 26 crew immediately started to fall. We waited to see if they would crash or level off before deciding what action to take. Fortunately, they leveled off at about 12,000 feet.

We were still over land at the time. When we say that they were not going to crash, we went down to “buddy” them as they were being attacked by three Japanese fighters. Their gunners with our help managed to drive the fighters off. The dive from 22,000 feet to the 12,000 ft altitude was my fastest in a B-29. I could not operate the cabin pressure not to have our ears feel the pressure.

Crew No. 26 limped along, with Crew No. 34 tagging along, until it was estimated to be 90 miles from the Japanese coast. The plane had been gradually losing altitude until it hit the water. Crew No. 34 circled the area and counted the men in the lifeboat. There were 12 men in the plane and all had gotten in the lifeboat. Henry Snow was flying with Crew #34 for experience as his crew had just gotten over from the states. His flight engineer was flying for the same reason with Crew No. 26

Crew No. 34 threw out all of their emergency equipment, the “Gibson Girl” radio, life rafts, food and everything else that could be used by the downed crew.

While circling the life boats, our navigator and radio operator were contacting the Super Dumbos in the area. It was necessary to pinpoint our location to let the Super Dumbos know where we were. Our location was made from a fixed station in the Aleutian Islands and Hawaii. By the time this had all taken place and our fuel was getting low. The Super Dumbo said it would be approximately 45 minutes before they could arrive at our location. It was determined that we could stay in the area approximately 25 minutes longer without jeopardizing our ability to get to Iwo Jima. These transmissions, of necessity, being so close to the Japanese coast had to be in code. After remaining in the area approximately 30 minutes we headed for Iwo Jima. In an effort to gain more airtime we ejected our bomb bay gas tank and removed and jettisoned the ammo from all the gun turrets. When we landed on Iwo Jima, the chart indicated all the gas had been used. No gas was visible in the tanks.

It was late in the day when the report of the downed crew was made on Iwo Jima. Three crews were sent out early the next morning to locate the crew in the life boats. These crews were Crew No. 23, Joseph J. Semanek, AC, Crew No. 28, Charles B. Miller, AC and Crew No. 21, William J. Senger, after spotting a downed crew in a life boat and contacting a rescue, the three planes returned and the search called off. When the rescued crew was identified later it was not that of No. 26 Orionchek. Another search team was sent out but nothing further was ever found.”

Charles Beverly Coutts was 21 years old at the time of his death. 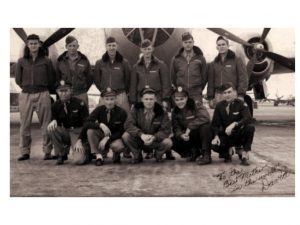